To configure a network device, you need to generate the configuration in a vendor specific way. This may be a string, XML or something else. What I have seen people do is write a Jinja template that is specific for a vendor. Sometimes, they also make child templates to make things manageable. Additionally, data is oftentimes coming from many different places. It is very inviting for someone to end up with a plethora of Jijna templates, YAML files and whatnot. This is especially the case with multiple people working a project for some time.

When start out, they start with a configuration, for instance:

After examining the configuration, they come up with a template:

Obviously there is more to a configuration. Interfaces, secrets, BGP neighbors, etc. YAML files are made, a secrets manager is installed and databases are setup, maybe Netbox.

An alternative approach would be to start modelling your network in code and follow something like this: 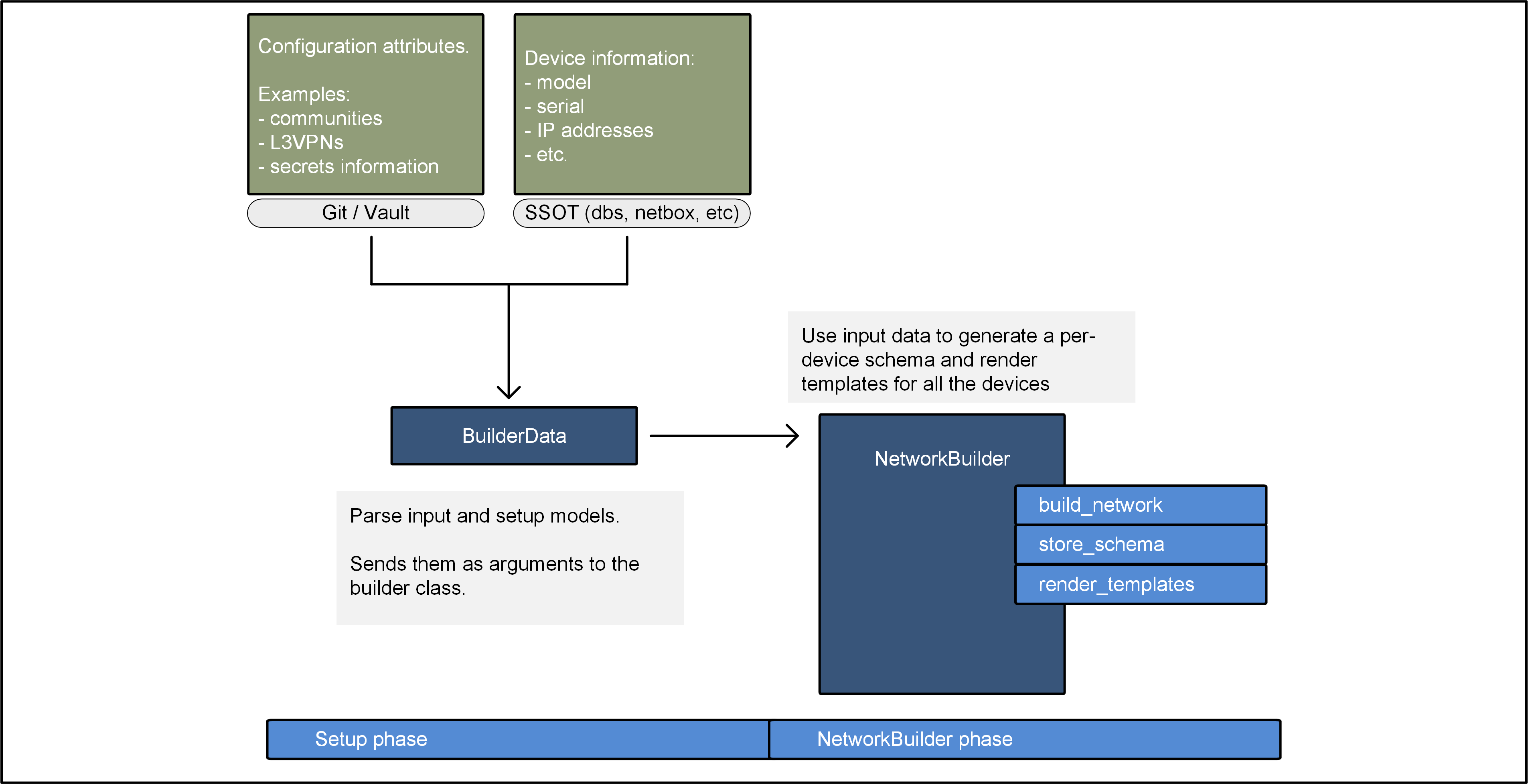 Before anything else, think about what data any given configuration would need.

You could start off with an interface:

Next, you would embed this interface into a device. While you are building said device, you would realize other characteristics are needed as well. So, you start adding things:

In the end, you realize that from a configuration point of view, the network is basically a list of these devices you have constructed:

Data to populate these constructs can come from different places. We can write the functions to gather that information and have those functions return the proper model/value:

We now have all the information we need.

The next thing that would be useful is something to put it all together, like a builder class:

Great, we have a class that has all the fields and data that is required to instantiate the configurations for the network. Nothing much is happening though.

What you could say is missing is something to produce the configurations. Before that though, we might also need to take care of certain things and manipulate the per device data. For instance, the spine routers do not need any communities, but the leafs do.

Wat we do is add 3 methods to the class:

Next, we make a jinja template:

Finally, we drive the whole thing:

This approach has worked very well for me. Organizing things like this has offered a lot of advantages. To name a few:

But I think most importantly, the models are driving everything. So swapping out individual components becomes (relatively) easy. Pydantic will start throwing up in case you forget something or make a mistake.

Also, as a sidenote, I chose to include pydantic in this overview even though I am not really using all the features it has to offer. There are a lot of things pydantic has to offer. Validators to just mention one.

‘But without pydantic it would be faster!’

Yes. But ‘pydantic enforces type hints at runtime and provides user friendly errors when data is invalid’. Generating hundreds of thousands of lines of config is nothing for modern CPUs and you generally generate them only every now and again. The thing that matters most is being precise about what you generate. Pydantic can really help up your game here. So including it here is my way of telling you to go check it out.

A working example is found here. You can clone the repo and run main.py.

Thing that could be added: